Interseller's integration with Pipedrive can automatically sync contacts and assign them to a pipeline stage within Pipedrive when contacts are added to a sequence on Interseller. 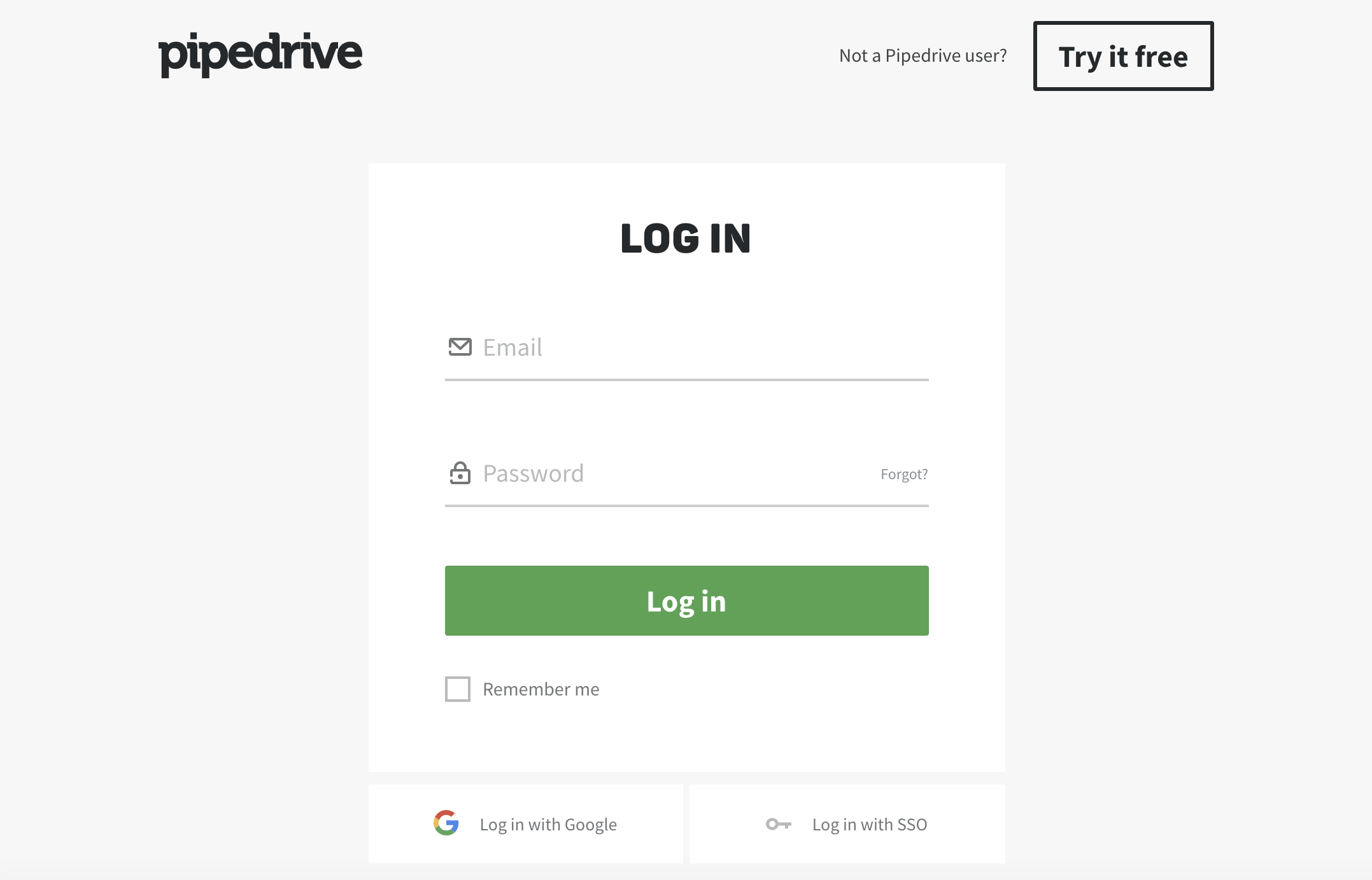 After Pipedrive is connected, you can choose how contacts from all sequences sync over from Interseller to Pipedrive by selecting one of the following sync options: 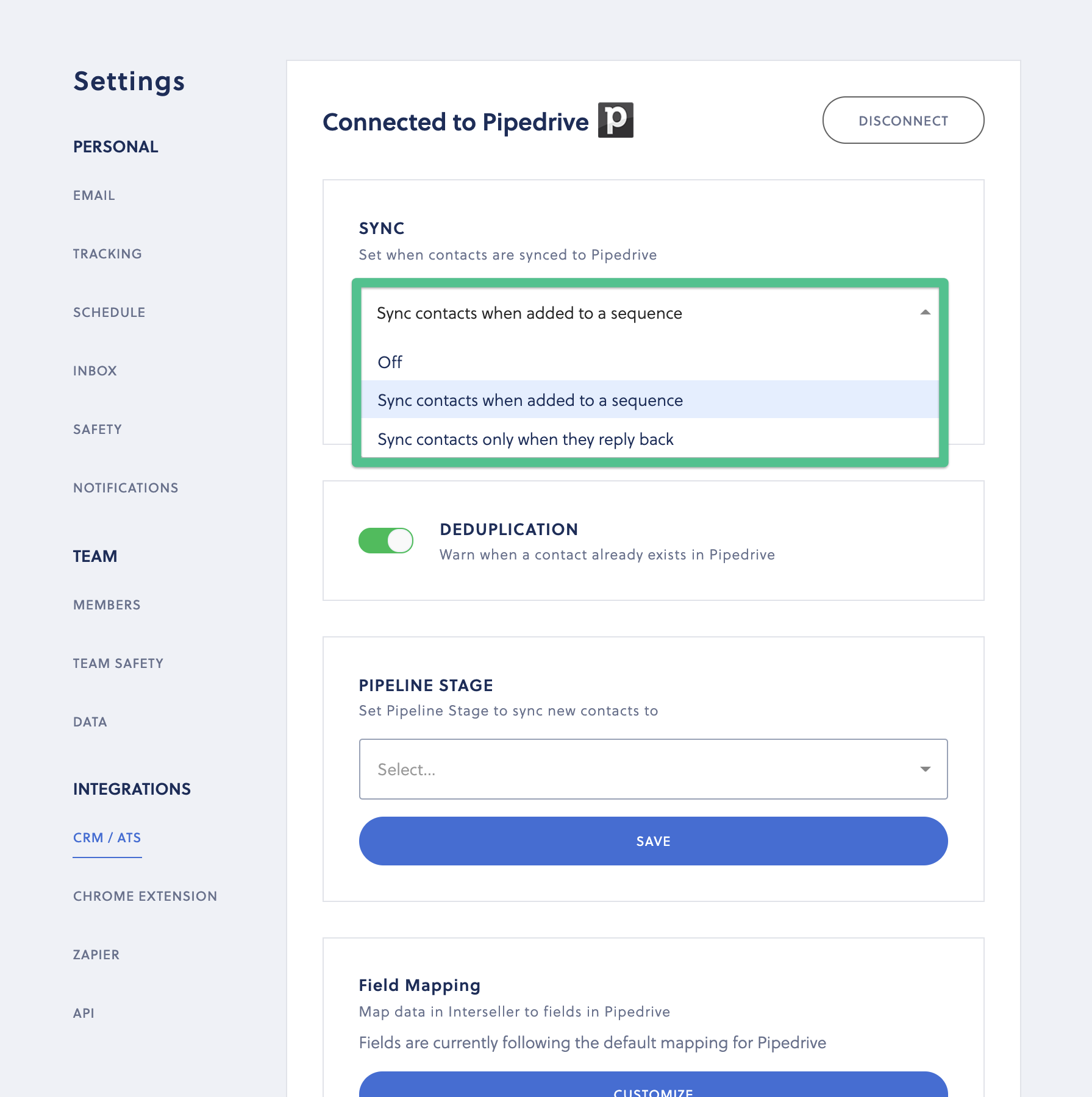 Owners and Managers have the option to clone their integration settings to teammates currently connected to Pipedrive, whether or not they are part of a Group.

Using this option will clone all of the settings available with the Pipedrive integration as there is not an option to select specific settings to copy over.

Note: This does not apply to teammates that are connected to a different integration or do not have an integration set up within their account.

You can also disable syncing individual sequences over to Pipedrive by toggling off the "Sync to Pipedrive" feature in the "Syncing" tab within the sequence's settings.

If you do not want contacts to sync over to Pipedrive, you will need to make sure this setting is enabled first before adding contacts into the sequence. 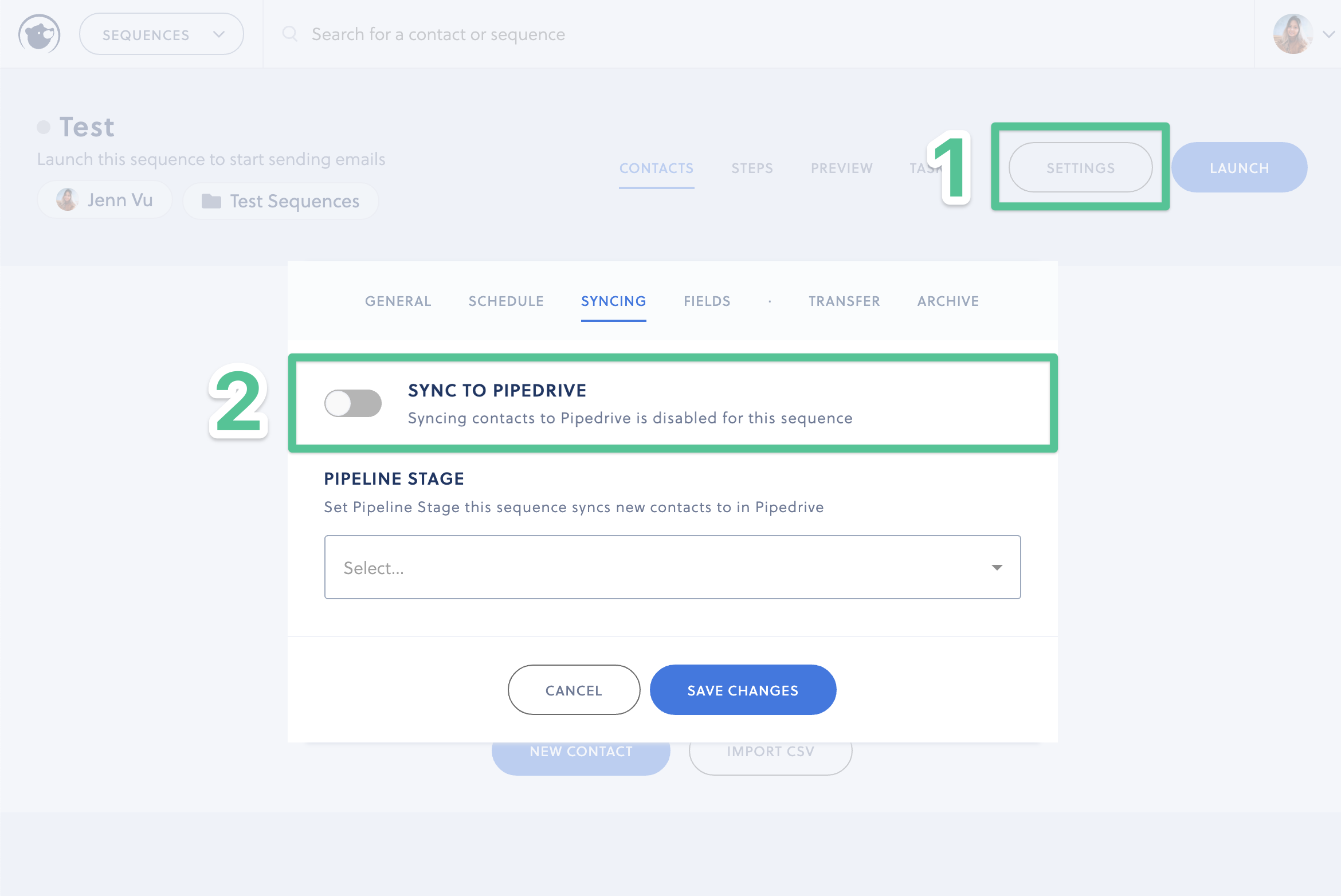 If contacts have been added before Pipedrive was connected, contacts can be backfilled later through the  "Resync to Pipedrive" feature. You can resync contacts to Pipedrive individually or in bulk. 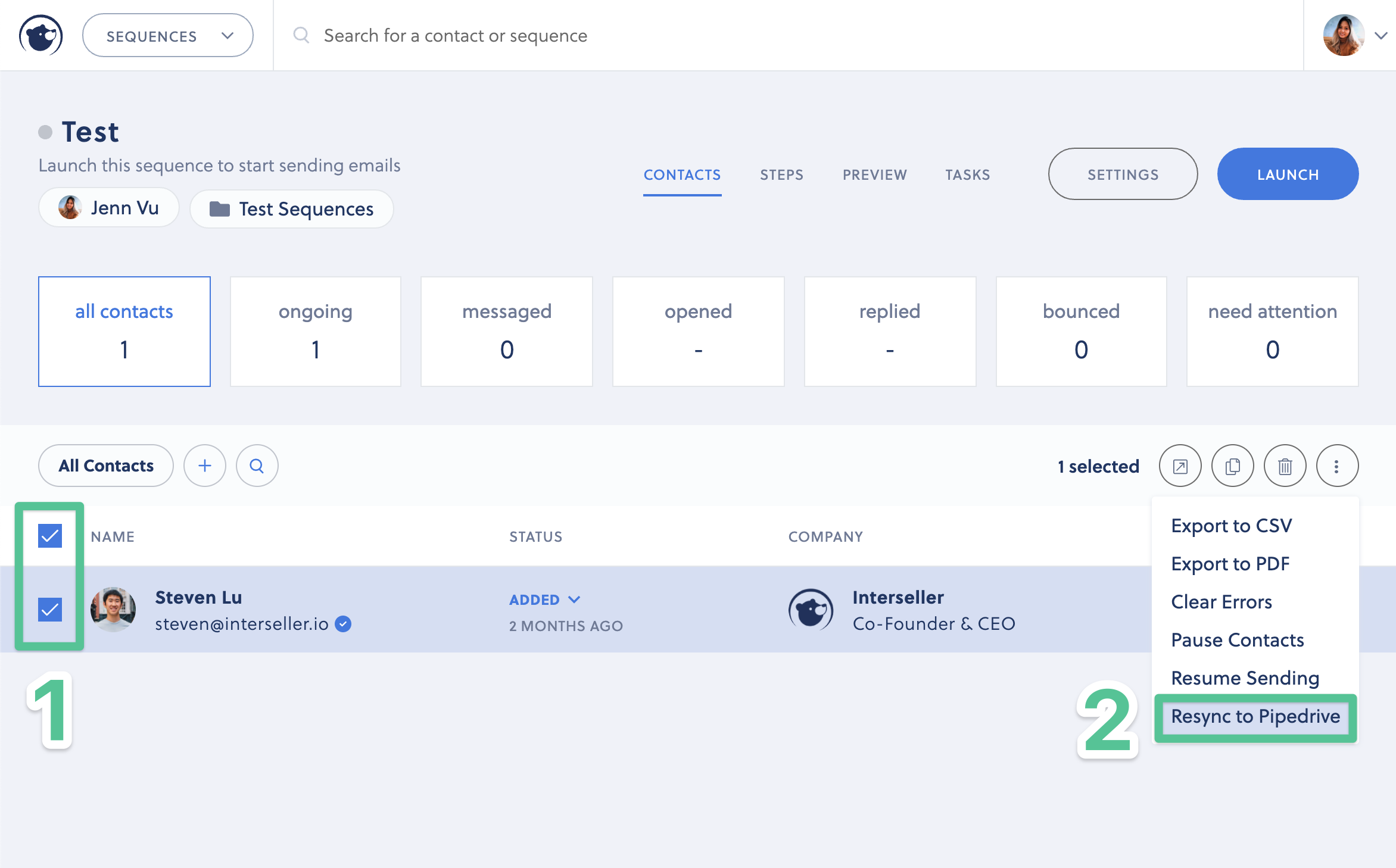 If deduplication is turned off, then we will not warn you if the contact already exists in Pipedrive.

Below are two common scenarios of when a new contact record will be created and when it won't be created when the contact has synced over to Pipedrive: 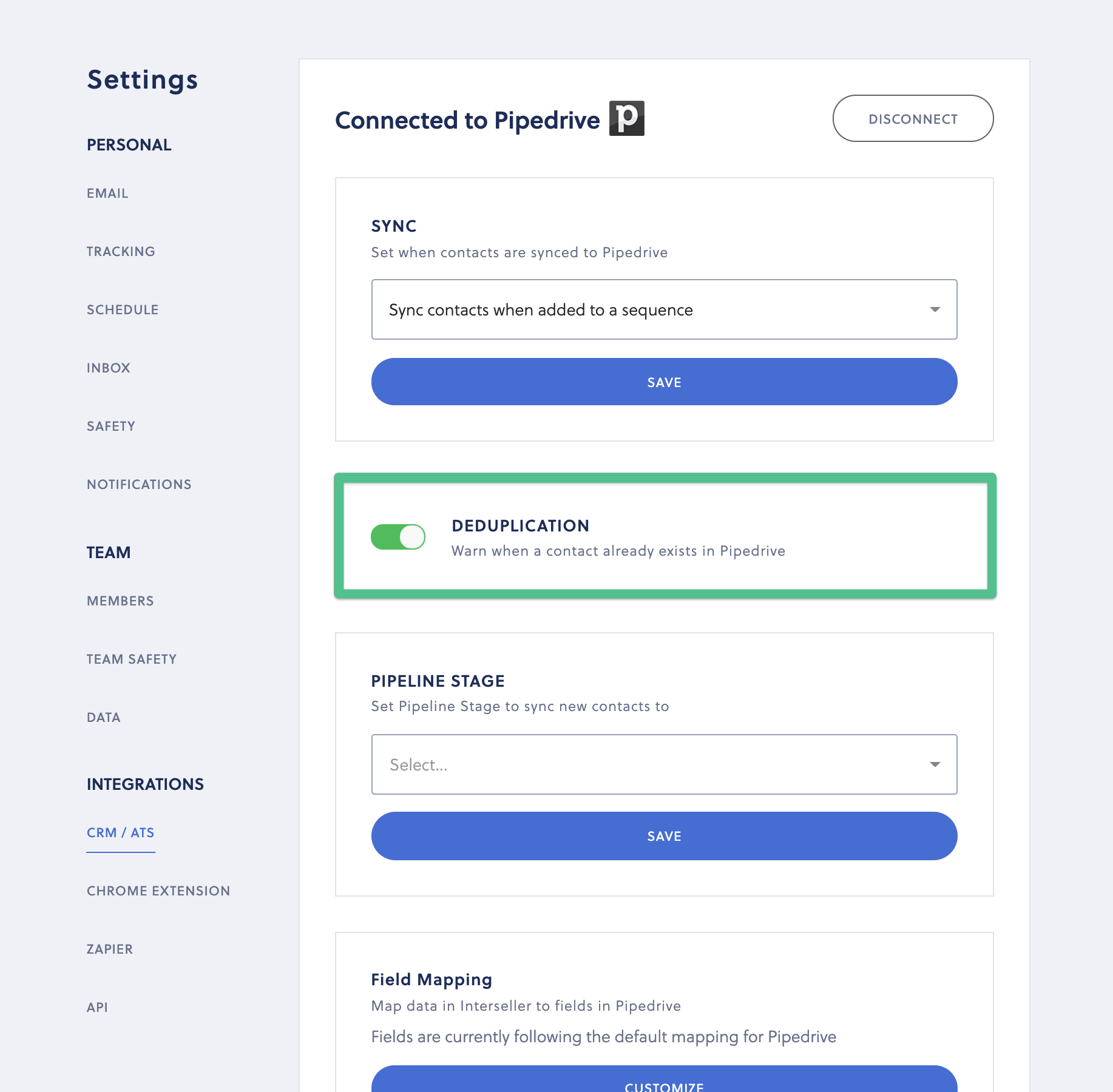 Changing the default pipeline stage at the account level

You can set the default pipeline stage that all contacts across all sequences are synced to at the account level by adjusting the "Pipeline Stage" sync setting. You can customize your pipeline stages within your Pipedrive account.

We recommend leaving this blank if you are syncing contacts to specific pipeline stages for each sequence.

Note: To have multiple contacts grouped under the same company in Pipedrive, the company name must be spelled the same for each contact. 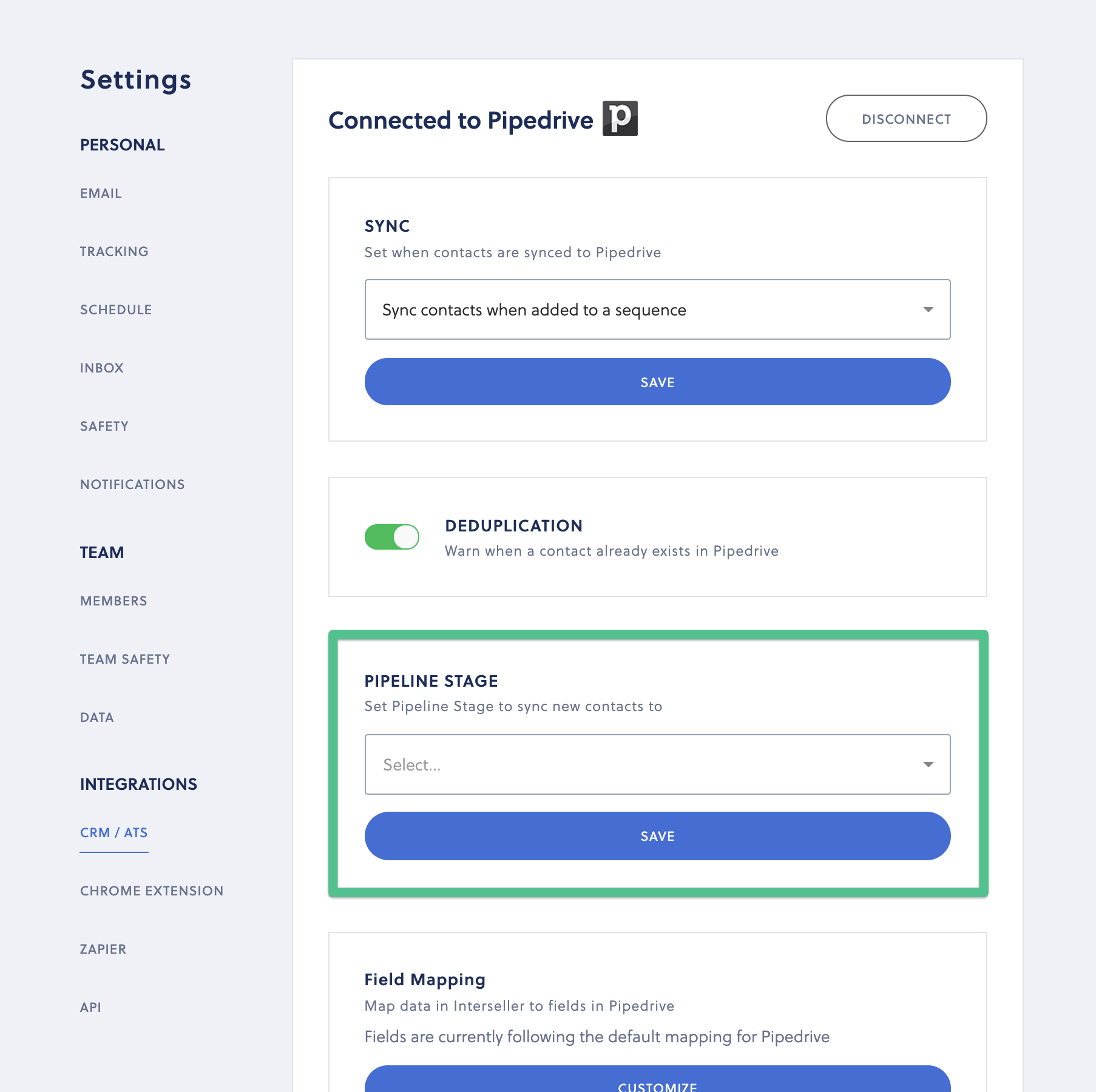 Changing the pipeline stage at the sequence level

You can override the default pipeline stage by adjusting this setting for each individual sequence.

To adjust the pipeline stage setting, open up the sequence's settings, click on the "Syncing" tab, and select the specific pipeline stage for contacts to sync over to within Pipedrive.

Be sure to select the correct pipeline stage first as contacts cannot be re-synced if they were added first and then a pipeline stage is selected for the sequence at a later time. 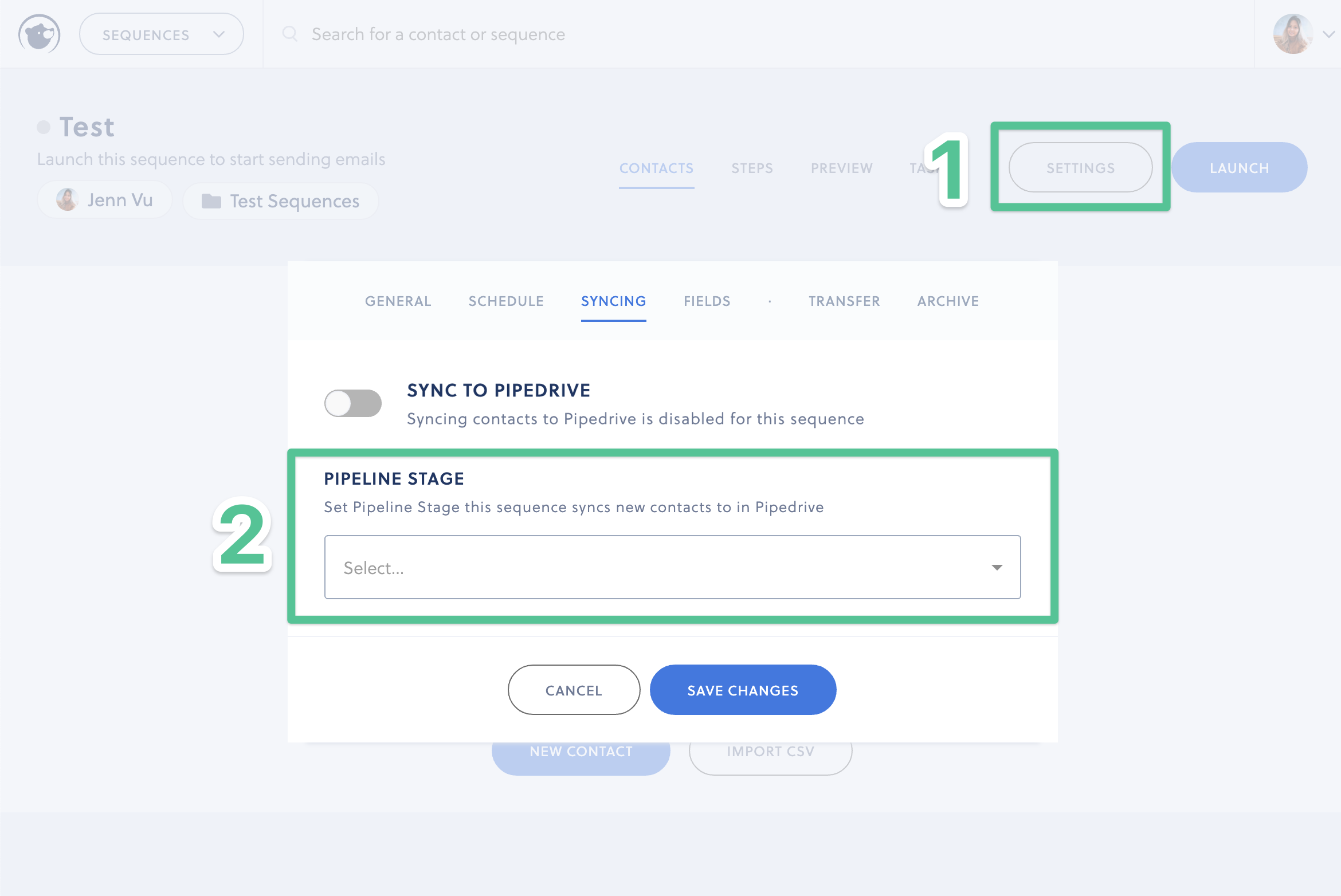 You can also customize how the field mapping from Interseller syncs over to Pipedrive. These settings are an advanced feature so we only recommend customizing them if you're familiar with setting this up. If you need any assistance with setting up the custom field mapping, we recommend reaching out to a member of our support team. 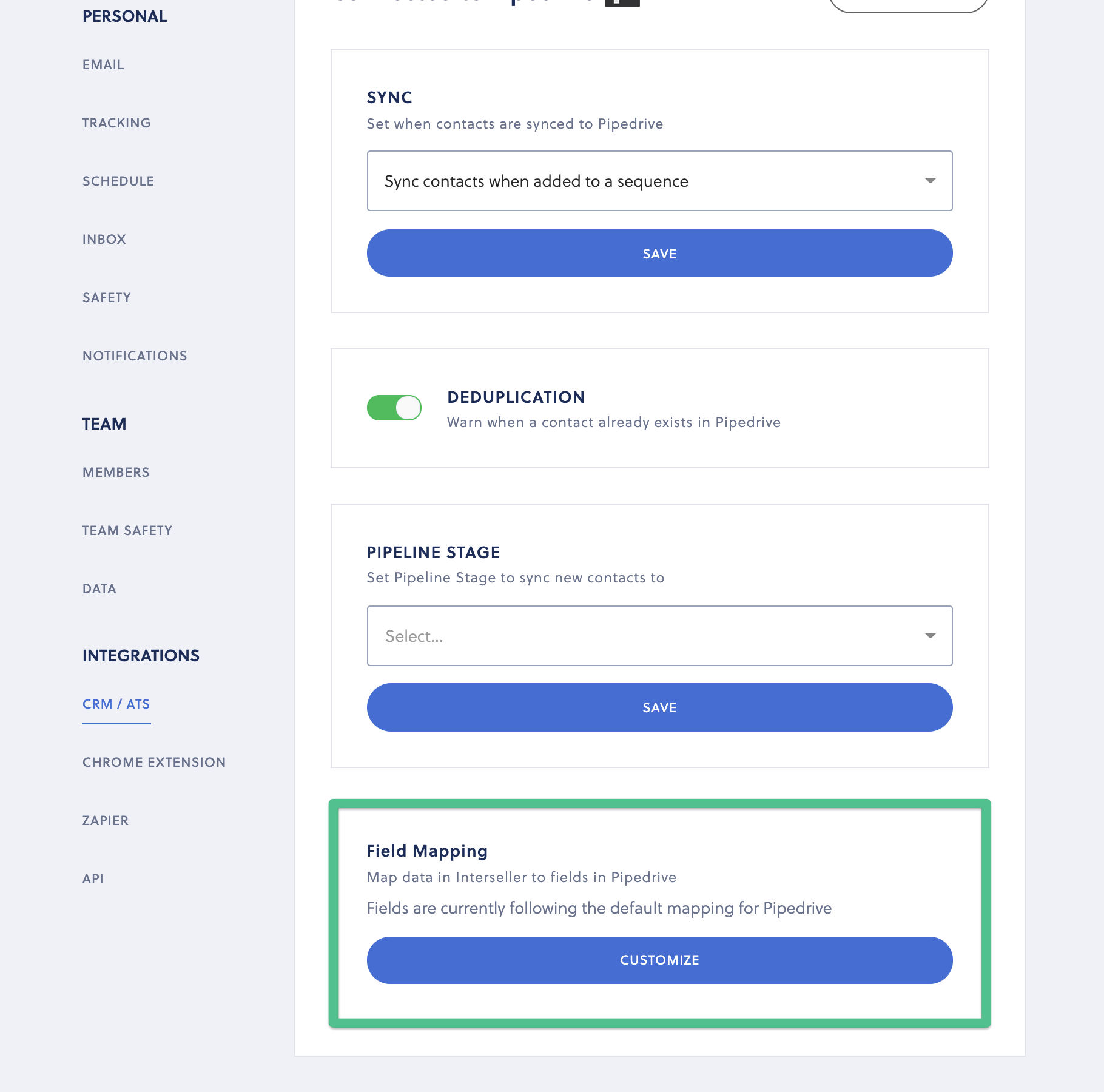 Sync contacts to an organization in Pipedrive 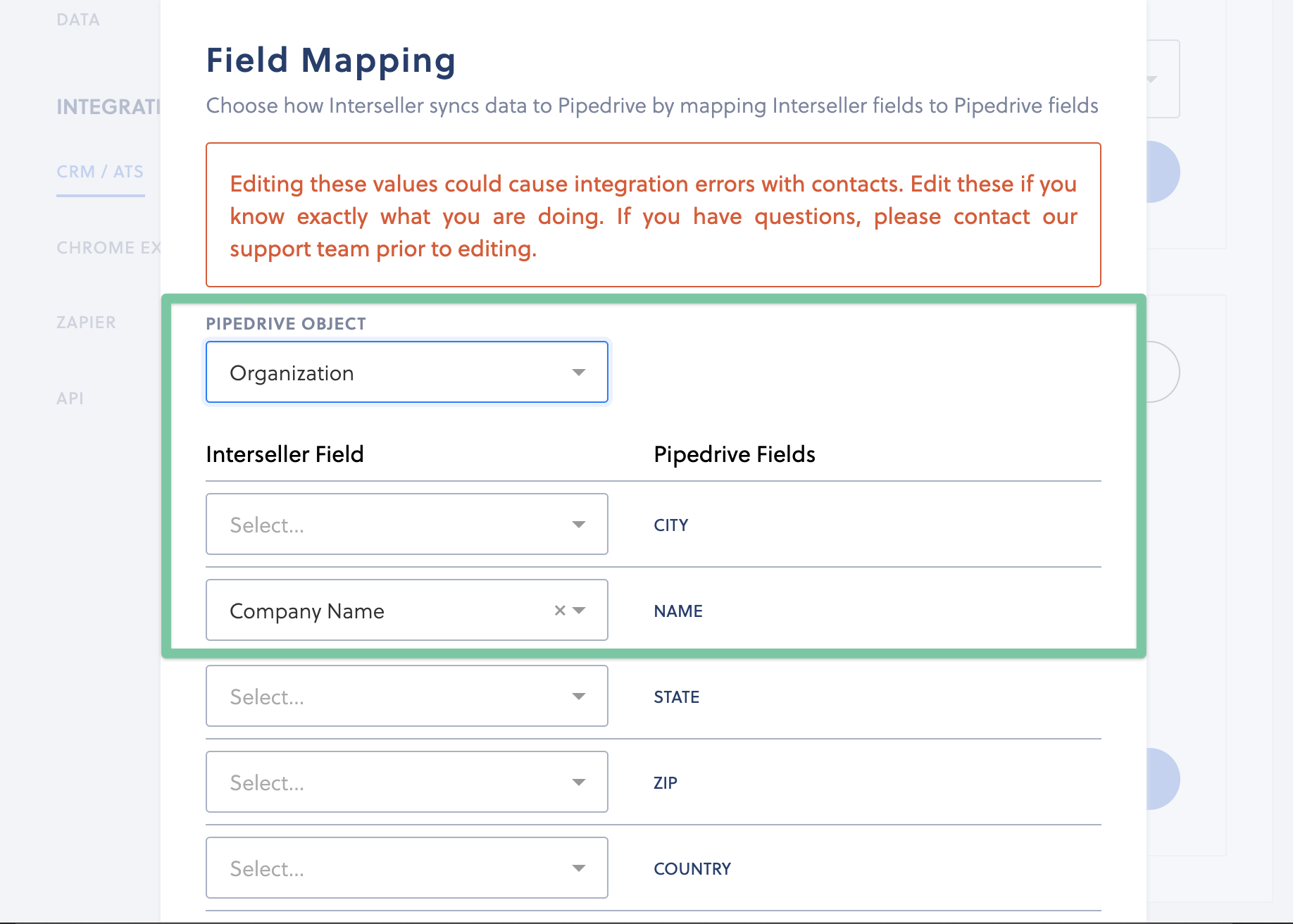 Sync contacts as a person in Pipedrive 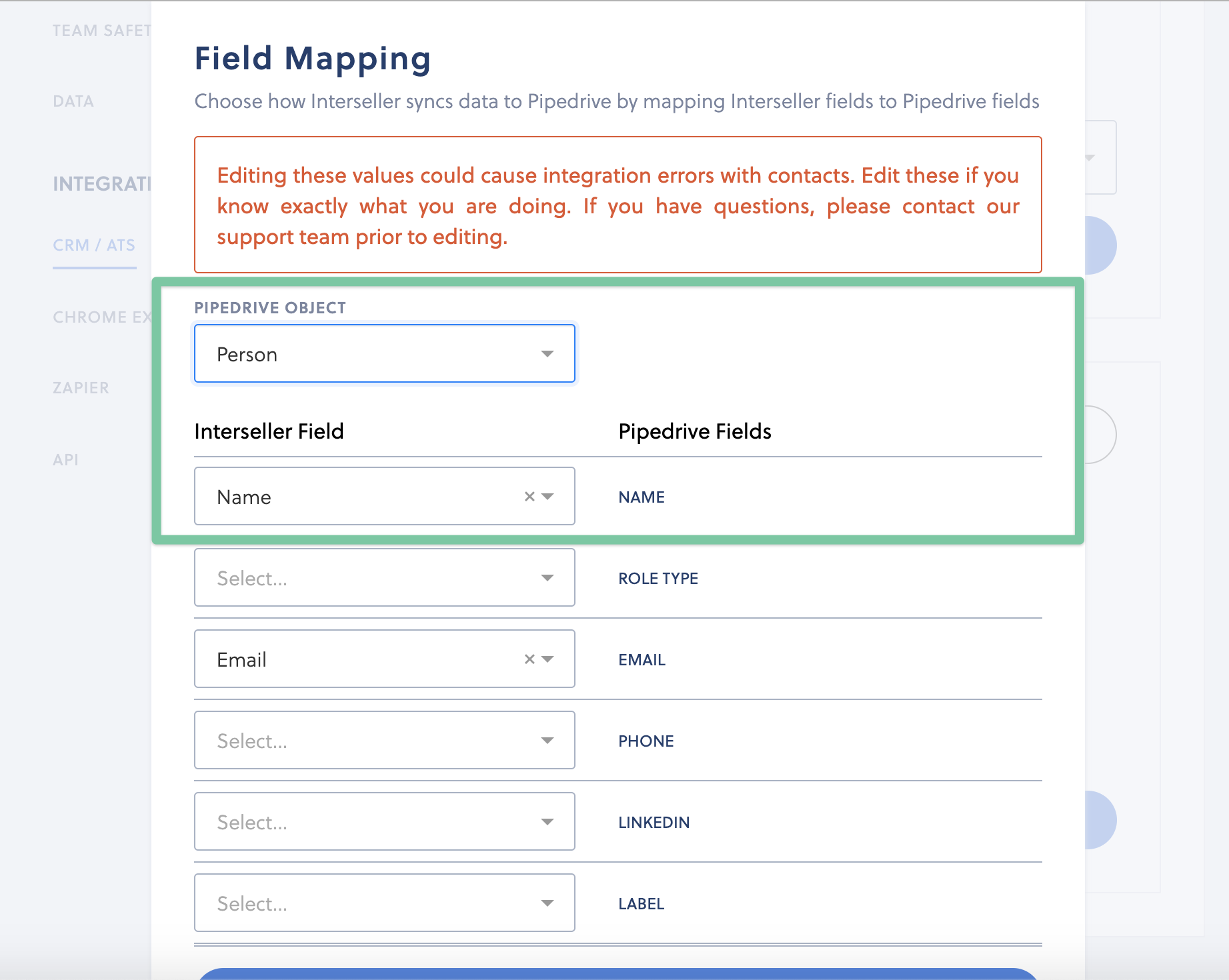 Important: To have email activity sync over from Interseller to Pipedrive, you'll need to upgrade to to Pipedrive's Gold tier package.
Did this article answer your question? Thank you for your feedback! There was a problem submitting your feedback. Please try again later.
Last updated on February 14, 2022